Home » The Rise and Fall of Nicolas Cage

The Rise and Fall of Nicolas Cage

He is the “Lord of War“, he has driven a 1971 Shelby Mustang GT500, he (literally) got his face swapped with John Travolta and he did a B&E into Alcatraz. Above all, he’s won an Oscar in 1995: Nicolas Kim Coppola aka Nicolas Cage. If you were born in the late eighties or early nineties it is impossible not to have seen at least one Cage movie that you liked. Sadly, Nicolas Cage also went an island with bee-obsessed inhabitants, drove a motorcycle with his head on fire (twice) and survived the apocalypse.

The man known as the “one true god” used to own castles in Germany and England, an island in the bahamas, a dinosaur skull, 9 rolls royces and a yacht named ‘Sarita‘. But the turbulent career and private life of Nicolas Cage had its largest bump when Cage went broke in 2009. Since then, it seems he’s been rather unpicky regarding his roles.

What does the audience think of the movies Mr. Cage acted in? The average user rating at the Internet Movie Database (IMDb) of the movies1 he acted in is 6.0. For reference, the average score of Leonardo DiCaprio is 7.2, for Will Smith and Mel Gibson 6.5 and for Starship Trooper Casper Van Dien 4.6.

How the career of Nicolas Cage evolved can be seen in the following graph: since 2009, a lot of his movies seem to be under the 5.0-line and with Left Behind he hit an all-time personal low. Nevertheless, Nicolas Cage’s whole career is definitely a mixed picture. And his last years weren’t all bad it seems. 2010 was a rather good year for Nicolas Cage thanks to ‘Kick-Ass‘ – the deal could already have been made before financial issues became apparent. And in 2013 there was ‘Snowden‘ and ‘The Croods‘ in which Cage voice-acted. But it’s safe to say that the last years aren’t the most memorable years of his career. The average rating of the movies he acted in until 2009 is 6.2 while his most recent years average to 5.5. Nic is not alone

Nicolas Cage is not the first celebrity or famous actor in the world whose financial fall is way steeper than the rise. You don’t have to be a celeb watcher to find some actors that went broke. According to some sources, Kim Basinger went broke in the early nineties because of legal battles over backing out of the lead role in ‘Boxing Helena‘ and a commercial failure regarding a village she was trying to turn into a tourist attraction. Burt Reynolds denies being broke but had to sell off a lot of memorabilia. Then there is the very sad story of ‘Mummy‘ star Brendan Fraser. And then there’s Stephen Baldwin and Gary Busey.

The following plot shows the evolution of average yearly movie ratings for 6 actors that have gone through financial hardship in the 10 years before and the 10 years during/after financial woes. As can be seen from the graph, not all actors become unpicky about the roles they play. Only Brendan Fraser & Nicolas Cage’s yearly average seems to have gone down drastically.

The next plot shows the aggregated average of the 6 actors, broken down by the period before or after their financial problems reached the press. As can be seen from the boxplot, the mean (red dot) is almost equal. The tiny difference of 0.04 in favour of the post-financial problems period is statistically not significant2. I guess Nicolas Cage is just an oddball after all. An oddball that wears a T-shirt displaying his own meme. 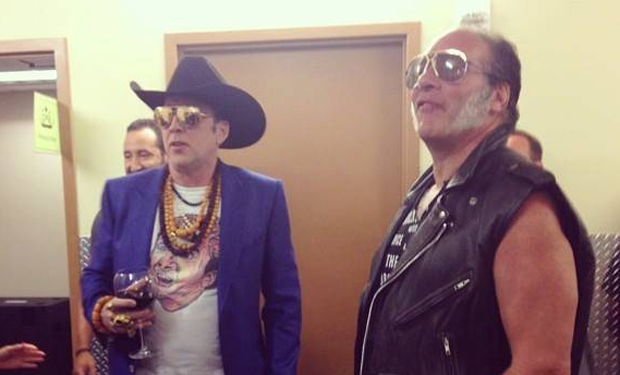