Home » The last will be first: why you should hope your country is the last on stage in Eurovision

The last will be first: why you should hope your country is the last on stage in Eurovision 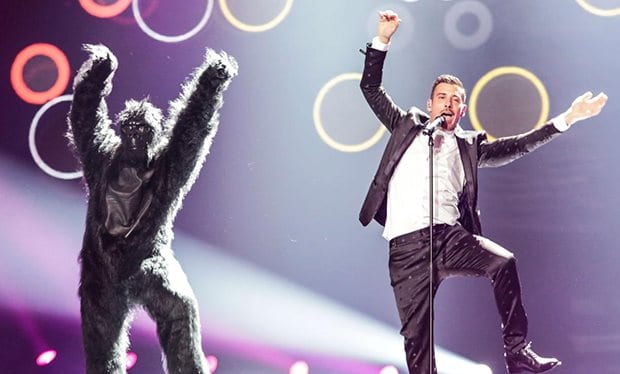 Gorilla suits don’t win you a Eurovision Song Contest. Milk jugs don’t either. Neither does yodeling on a cannon. What does help is the ranking order position in which you perform. After all, the saying (matthew 20:16) goes “So the last will be first, and the first will be last.” That’s right, if you’re the last artist on stage, you’re very likely to end up with more points than the artist who went first.

Despite the absence of Måns Zelmerlow as show presenter, the yearly Eurovision Song Contest (ESC) final made a lot of Europeans (and Aussies) stay at home on a Saturday night. After a mix of music, spectacle, dance, kitsch, irony, broken English and a prankster, the jury and millions of voters crowned the Portuguese Salvador Sobral as the winner, ending the longest winless streak in Eurovision history. But, as you read on, you will find out this year’s Eurovision Song Contest was historical in more than one way.

First of all, thanks to the new voting system, in use since 2016, Salvador Sobral achieved the highest score ever in a Eurovision Song Contest; 758 points. Starting from last year, each country awards 12 points from the jury and 12 points from televoting. With 42 countries participating, the maximum possible score amounted to (12 + 12) * 41 = 984 points. Portugal’s Salvador Sobral managed to acquire 77% of that score. From a historical perspective, this is a very high score. As a matter of fact, Salvador Sobral managed to break into the – up until last week – Nordic top 3 monopoly, trailing Måns Zelmerlow and Alexander Rybak. The order of appearance

Apart from Bulgaria, Sobral crushed the competition. For a data nerd like me, the most interesting question is if Belgium and Sweden have earned their place in the top five. Let me explain. On the horizontal axis you can see the order of the acts throughout the night. On the vertical axis, you can find each act’s score. I have also added a trend line. Notice the positive slope of this trend line. It suggests that performances later at night, on average, received higher scores than their early competitors. Could it be that if Italy switched places with Belgium, Italy would be in the top five and Belgium wouldn’t? Wändi Bruine de Bruin at Carnegie Mellon/Leeds University breaks the taboo in her research on serial position effects. Ten year ago she discovered that performance evaluations in figure skating and Eurovision are affected by their order of appearance. She offers multiple explanations for her findings. The direction-of-comparison effect; “When sequentially appearing options are judged by comparison, judges are initially forced to compare each performance to ones before it—but not ones after it. Such unidirectional comparisons tend to overweigh the unique features of each new, focal, performance.” Furthermore: “Because determining a winner is ultimately the goal of a competition, judges may be especially reluctant to give high scores to early contestants, in case a better performer may come along.” Despite the multiple compilations during the voting time, this effect persists, as impressions are very perseverant1.

Thanks to the many volunteers at Wikipedia (hey, that’s me too), there is an overview for each round and each edition of the ESC. For the following analysis, data from the year 1999 and onward was used. 1999 is the first year that non-national languages were allowed. By aggregating all the data into a large dataset I was able to investigate if serial position effects are a recurring phenomenon, even after the reintroduction of a jury and handing over the decision of the running order over to the producers.

On the horizontal axis of the following graph we find the relative position of an act. On the vertical axis, you read each act’s achieved % of the maximum score of that round and edition. To estimate the serial position effect, I experimented with two regression models, an ordinary least squares linear model and a second degree polynomial.

For all countries that have at least performed in 10 rounds, the effect was strongest in Greece, Germany and Bulgaria. Only in 6 of 41 countries was the effect negative. The strongest negative correlation was found in Ukraine. It would seem reasonable that the introduction of a jury would have reduced the recency effect. A simple average of the slope of the linear function for the period before 2009 (slope of 0.16) and since 2009 (0.10) suggests yes. But it might be a little to early to judge that. Lastly, another reason why last weekend’s Eurovision Song Contest was historical: its first semifinal had a massive negative serial order effect; never before have early performances done so much better than later performances.

If you didn’t read the whole way through, just remember this: if you’re in front of the television on Eurovision night, you better be cheering for one of the last acts of the evening.